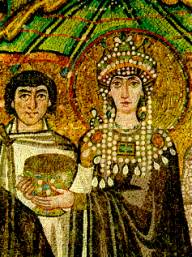 The Department of History at the University of Illinois at Urbana-Champaign participates in an interdisciplinary field in the study of Late Antiquity, encompassing the Late Roman, Early Medieval, and Early Byzantine periods (third through seventh centuries CE). Late Antiquity now is recognized as one of the most significant periods of the human past. In the west, Late Antiquity saw the gradual withering of classical society, government, and religion, and the for­mation of a strictly western European, Christian society that eventu­ally would culminate in the modern‑day western European nations. And in the eastern Mediterranean, the Roman Empire continued and evolved as the "Byzantine Empire," and the seventh century saw the birth of another major world religion, Islam, along with the Islamic caliphate. The field in Late Antiquity has interdisciplinary aspects ranging from geographical (eastern and western Europe, North Africa, the Near East), to methodological (including palaeography, epigraphy, numismatics, prosopography, and computer applications), to topical (too numerous to mention), and to disciplinary (cited below). It is the only program of its kind in the state and surrounding area. Its associated faculty in Ancient and Medieval Studies  in the Department of History and in other university Departments have internation­al reputations in their fields and provide the opportunity to craft a program of study in Late Antiquity of unparalleled richness and depth.

Containing more than eight million volumes, the University of Illinois Library is the third largest academic library in the nation, and the Classics Library is the starting point for accessing a multitude of late antique resources. We also are affiliated with the Newberry Library of Chicago, which boasts particularly fine collections in Renaissance and early modern Europe.

The late antique faculty at Illinois organize regular late antique symposia and conferences, including a Symposium on the 1500th Anniversary of the Battle of Vouillé in the Spring of 2007; the biennial "Late Antiquity at Illinois" conference, which has met in 2004, 2006, 2008, and 2010, and highlights current research by faculty from institutions in Illinois and neighboring states. In 2005, we sponsored the sixth biennial Shifting Frontiers in Late Antiquity conference, on the topic of "Romans and Barbarians and the Transformation of the Roman World," which hosted over 100 participants from 17 countries. In conjunction with the Shifting Frontiers conference, field faculty collaborated on an exhibition at the Spurlock Museum, "The Origins of Merovingian Archaeology", which spotlighted the Spurlock's extraordinary collection of Merovingian artifacts.

Graduate study in Late Antiquity at Illinois focuses on preparing graduate students for life in the world of the scholarly and academic professional. There are late antiquity seminars nearly every semester with end-of-semester symposia. Field faculty often sponsor sessions at the annual International Medieval Studies Congress at Western Michigan University. Prior to the congress, we and our colleagues in Medieval Studies sponsor a pre-Kalamazoo symposium where our graduate student presenters give previews of their papers. Late Antique faculty also have sponsored activities such as a Medieval Latin Reading Group,  graduate student mini-conferences; and a Late Antique student/faculty study group under the rubric “Late Antiquity after Hours.” Graduate students also are encouraged to present their research at other internal and external venues.

We welcome scholars and students from abroad who are able to come, sit in on classes, and work with late antique faculty for periods extending anywhere from a few weeks to a full term or more. Visigint Faculty and Graduate Students have come from Russia, Spain, and several British universities. We usually cannot provide funding for overseas visitors, but UIUC can offer a variety of guest privileges, ranging from library privileges to the opportunity to rent university housing.

The Program in Medieval Studies

The University’s Program in Medieval Studies rings together scholars from the classical period to the Renaissance, and offers an extensive lecture series and the possibility of graduate fellowships for students pursuing the graduate Certificate in Medieval Studies.

The Department of History 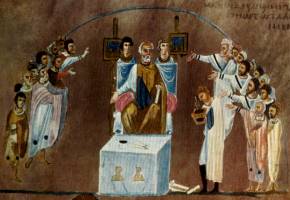 Illinois ranks among the top ten departments of history in public institutions. Our faculty in early European history has grown over the past few years, as we have added two new members with ancient and medieval specialties. Our treatment of Late Antiquity benefits from strong fields in ancient, medieval, and early modern Europe. Themes in which our department is particularly strong include women and gender, the new cultural history, social history, religious history, the history of work, and the history of war and society. Individuals pursuing the study of Late Antiquity will benefit not only from courses with primary faculty, but also from a graduate student readings group, a faculty/graduate student colloquium, and presentations by visiting scholars. To learn more about the Department, see our web page. To apply for admission and financial aid, please write: Graduate Secretary, Department of History, University of Illinois at Urbana-Champaign, 309 Gregory Hall, 810 South Wright Street, Urbana, IL 61801.

(PhD, Wisconsin, 1979), Late Antiquity; social and cultural history of the Roman and Byzantine Empires; impact of the barbarian settlements; numismatics, prosopography, codicology, and computer applications to historical studies. He currently is working on books on “How the Barbarians Saved Civilization”; the late Roman comedy “The Querolus”; and (in collaboration with Danuta Shanzer) the life and letters of Desiderius of Cahors. He has authored or edited twelve books, most recently Sources in Ancient Mediterranean Civilizations. Documents, Maps, and Images

(Oxford University Press, 2016); Ancient Mediterranean Civilizations: Prehistory to 640 CE (2nd ed., Oxford University Press, 2014); Romans, Barbarians, and the Transformation of The Roman World: Cultural Interaction and the Creation of Identity in Late Antiquity (with D.R. Shanzer) (Ashgate Press, 2011); Ancient Mediterranean Civilizations: Prehistory to 640 CE (Oxford University Press, 2011); People, Personal Expression, and Social Relations in Late Antiquity, 2 vols. (Univ. of Michigan, 2003); Society and Culture in Late Antique Gaul. Revisiting the Sources (Ashgate, 2001) (with D.R. Shanzer); Law, Society, and Authority in Late Antiquity (Oxford Univ. Press, 2001); and Ruricius of Limoges and Friends: A Collection of Letters from Visigothic Aquitania (Liverpool Univ. Press, 1999), and has published over 70 scholarly articles, including, recently, “Provinciales, Gentiles, and Marriages between Romans and Barbarians in the Late Roman Empire,” Journal of Roman Studies 99 (2009), 140-155; “Ricimer's Church in Rome: How an Arian Barbarian Prospered in a Nicene World,” in N. Lenski, A. Cain, eds., The Power of Religion in Late Antiquity (Ashgate Press, 2009), 307-326"; “L'adventus consulaire pendant l'antiquité tardive,” in Agnès Bérenger, Eric Perrin-Saminadayar, eds., Les entrées royales et impériales : histoire, représentation et diffusion d'une cérémonie publique, de l'Orient ancien à Byzance (Paris, 2009), 139-156; “Palaeography and Codicology,” in D. Harvey, S. Hunter, eds., The Oxford Handbook of  Early Christian Studies (Oxford Univ. Press, 2008), 140-168; “Where are all the PDBs?: The Creation of Prosopographical Databases for the Ancient and Medieval Worlds (opens in a new window)”, in K. Keats-Rohan, ed., Prosopography Approaches and Applications A Handbook (Oxford Univ. Press, 2007), 95-126; “Peregrini, Barbari, and Cives Romani: Concepts of Citizenship and The Legal Identity of Barbarians in the Later Roman Empire," American Historical Review 111 (2006), pp.1011-1040. He is Director of the Biographical Database for Late Antiquity Project, Editor of Oxford Studies in Late Antiquity, Founding Editor and Editor Emeritus of the Journal of Late Antiquity, and a past Guest Professor at the University of Heidelberg, the University of Metz, and Central European University, and a Fellow of the American Numismatic Society. 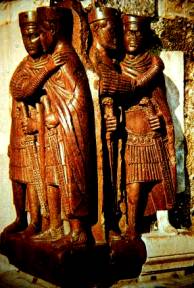 Richard Layton (Dept. of Religion), Research interests in Christianity in Late Antiquity, History of Biblical Interpretation, and the formation of a Christian intellectual tradition, publications include Didymus the Blind and His Circle in Late-Antique Alexandria: Virtue and Narrative in Biblical Scholarship (Urbana, 2004) and "Recovering Origen's Pauline Exegesis: Exegesis and Eschatology in the Commentary on Ephesians"
Journal of Early Christian Studies 8 (2000), 373-411.

Bruce Rosenstock (Dept. of Religious Studies), Publications include: New Men: Converso Religiosity in the Fifteenth Century; Heresies and Orthodoxies: Regulating Identities in Late Antiquity; and Laughter, Revelation, Exile: Studies in the Cultural Poetics of the Bible (in preparation). 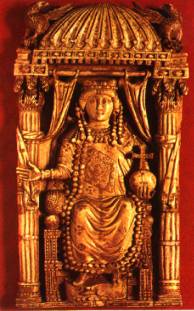