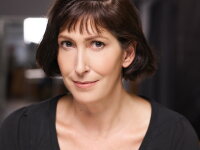 Carol Symes received the Ph.D from Harvard and became a member of Actors’ Equity in the same year.  She also holds a B.A. from Yale, an M.Litt from Oxford, and a Certificate in Stage Combat from the Society of British Fight Directors, earned during professional training at the Bristol Old Vic Theatre School.  Her first book, A Common Stage: Theater and Public Life in Medieval Arras (Cornell University Press, 2007), has been awarded the Herbert Baxter Adams Prize of the American Historical Association, the John Nicholas Brown Prize of the Medieval Academy of America, the David Pinkney Prize of the Society for French Historical Studies, and the Bevington Prize of the Medieval and Renaissance Drama Society.  She is the editor, with Caroline Goodson and Anne Lester, of Cities, Texts and Social Networks, 400-1500  (2010); and co-author, with Joshua Cole, of W.W. Norton's bestselling Western Civilizations textbook. She is currently developing a series of lectures on "The Medieval Legacy" to be filmed by The Great Courses. In 2019, she was honored with the Medieval Academy of America's Kindrick-CARA Award for Service to the field of Medieval Studies.

Fundamentally, her research focuses on histories of communication and transmission: the means by which people of the past exchanged ideas and information; and the processes by which artifacts and understandings of the past are transmitted to future generations. Her current book project, Mediated Texts and Their Makers  in Medieval Europe,  analyzes the material conditions and embodied uses of writing, the give-and-take among multiple genres of documentation and multiple literacies, and the fundamental influence of performance on the making and meanings of medieval texts.  It reveals that many non-elite historical actors were involved in negotiating, drafting, disseminating, and interpreting the sources on which we rely for our knowledge of the past. This project has been supported by a Burkhardt Fellowship from the American Council of Learned Societies and a residency at the National Humanities Center in 2013-14, as well as a fellowship from the National Endowment for the Humanities. It is under contract with Penn Press and will be completed in 2021.

Another ongoing project, Modern War and the Medieval Past: The Middle Ages of World War I, explores the ways that ideas, monuments, and landscapes associated with the Middle Ages were sentimentalized, targeted, destroyed, and revived before, during, and after the Great War.  Meanwhile, some new research looks at how the experience of incarceration shaped Shakespeare's actors, audiences, and plays.  It grows out of the lessons she learned while teaching and performing Shakespeare's plays at the Danville Correctional Center, a medium-maximum security state prison for men. She subsequently founded the Education Justice Project's Theatre Initiative and directed a full-length production of The Tempest in April of 2013.

Carol Symes is the founding executive editor of The Medieval Globe, the first academic journal to promote a global approach to medieval studies. This biannual publication explores the modes of communication, materials of exchange, and myriad interconnections among regions, communities, and individuals in an era central to human history. It encourages and promotes scholarship in three related areas of study: the direct and indirect means through which peoples, goods, and ideas came into contact with one another; the deep roots of allegedly modern global phenomena; and the ways in which perceptions of “the Middle Ages” and “the medieval” have been (and continue to be) constructed, shaped, and deployed around the world, in a global context. TMG's inaugural double issue was published in 2014: Pandemic Disease in the Medieval World: Rethinking the Black Death, edited by Monica H. Green. Like all thematic issues, it is also available in book form.

At Illinois, Symes holds joint appointments in Theatre, Classics, and Medieval Studies, as well as in History. She is also affiliated with the Unit for Criticism and Interpretive Theory, Global Studies, and the Program for Jewish Culture and Society. Over the past decade, she has begun to create stageworthy translations of several important medieval dramas, including the Anglo-Norman Ordo representacionis Ade (the so-called Jeu d'Adam), the Latin comedy Babio,  and the monumental Ludus de Antichristo.  All have been staged in productions directed by Kyle A. Thomas (Ph.D 2018).  Her verse translation of The Play of Adam  had its world premiere at The Cloisters (Metropolitan Museum of Art) in New York on December 17-18, 2016. It was restaged and filmed at Illinois in 2017, where a short documentary about the production's creative process was also filmed.

Carol Symes is the recipient of the Queen Teaching Prize for Instruction in History (2007) and the Dean's Award for Excellence in Undergraduate Teaching in the College of Liberal Arts and Sciences (2008).  She was named Helen Corley Petit Scholar for 2008-09.  In 2011, she was appointed Lynn M. Martin Professorial Scholar, an appointment that was renewed in 2014. To date, her work has also been supported by the Mellon Foundation, the Katholieke Universiteit Leuven, the William and Flora Hewlett Foundation, the Center for Advanced Study at the University of Illinois, the Illinois Program for Research in the Humanities, and the Centre for Medieval Studies at the University of York.  She has also been Visiting Associate Professor of History at Harvard.

Symes, C. (2007). A Common Stage: Theater and Public Life in Medieval Arras. (Conjunctions of Religion and Power in the Medieval Past). Cornell University Press. https://www.jstor.org/stable/10.7591/j.ctvfrxqvq