Eastern Europe comprises three sub-fields. Students may choose as a sub-field East-Central Europe from 1700 to the present. It covers the political, economic, social, and cultural history of the Habsburg Monarchy, Poland, the Czech Republic, Slovakia, Hungary, Estonia, Latvia, and Lithuania. Besides working up the general field, students may pursue their particular interests in a given country or region and in topics such as nationalism. 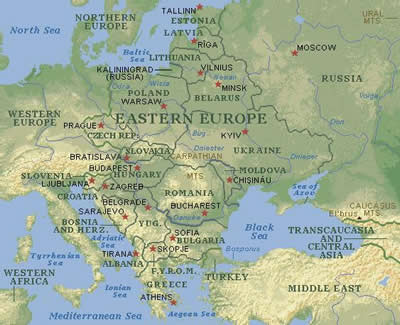 Students may choose as a sub-field Southeastern Europe from (at least) 1300 to the present. It covers the political, economic, social, and cultural history of the Ottoman Empire, Romania, Bulgaria, Greece, Albania, Serbia, Croatia, Slovenia, Bosnia-Hercegovina, Macedonia, and Montenegro. Besides working up the field as a whole, since it is a broad field, students, in consultation with the faculty, may refine it to suit their interests in a particular people, region, or time period.

Students may also choose as a sub-field East European Jewish history from 1500 to the present. It covers all aspects of scholarship on Jewish history and culture in the territories of the Polish-Lithuanian Commonwealth and its successor states.

Courses offered in recent years include Problems in East European History; Southeastern Europe: The Modern Balkans Through Film and Literature; The Cold War; East European Jewish History; and Ethnicity, Violence, and the State in Europe’s Borderlands.

Core Faculty in the Program

Other faculty with expertise in Eastern Europe

Dissertations Completed in Eastern and Southeastern Europe since 1990