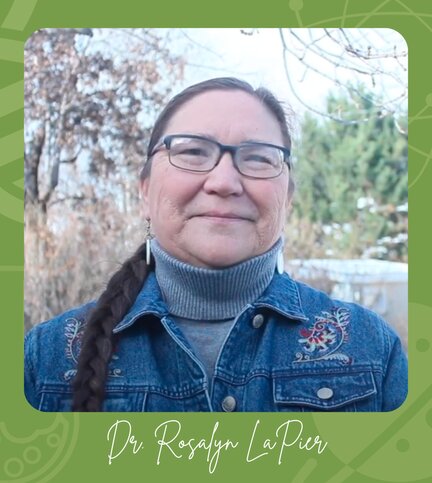 Rosalyn is an award winning Indigenous writer, environmental historian, and ethnobotanist. She works within Indigenous communities to revitalize traditional ecological knowledge (TEK), to address the growing climate crisis & environmental justice, and to strengthen public policy for Indigenous languages. She is the author of Invisible Reality: Storytellers,Storytakers and the Supernatural World of the Blackfeet. Rosalyn is an enrolled member of the Blackfeet Tribe of Montana and Métis.

Rosalyn has 20 years of teaching experience at research universities and Native American-controlled institutions. She has served as a visiting professor at the Harvard Divinity School. She teaches courses that focus on environmental issues within Indigenous communities and Native American history at the undergraduate and graduate level.

Professor Rosalyn LaPier (Blackfeet/Métis) has researched and written award-winning history of Sacred Landscapes & Indigenous Traditional Ecological Knowledge for over a decade. Below are some of their publications -- these are great resources for community, parents, teachers & scholars:

“Land as Text: Reading the Land,” in the “Forum on Narrative and Environmental Justice” with essays by Connie Chiang, Tiya Miles, and Lauret Savoy, edited by Mart Stewart, Environmental History, (expected January 2023).

“New Wave of Anti-Protest Laws May Infringe on Religious Freedoms for Indigenous Peoples,” The Conversation, July 12, 2021.

Professors Rosalyn LaPier (Blackfeet/Métis) & David R.M. Beck have researched and written award-winning history of Native American and Indigenous peoples of Chicago for over a decade. Below are some of their individual and co-produced publications -- they are great resources for community, parents, teachers & scholars:

UnFair Labor? American Indians and the 1893 World’s Columbian Exposition in Chicago. by David R.M. Beck. Lincoln: University of Nebraska Press, 2019. Available as an e-book. Scheduled for paperback in 2023

To see more of Rosalyn LaPier's written work please go to their website.