Tour of the History Department

In 1993-94 the Department of History celebrated its first 100 years. Although UIUC offered history courses shortly after its founding in 1867, the first full-time professor of history took up his position at the University in 1894 - at around the same time as the discipline became professionalized nationally. In 1906 the department awarded its first doctorate. The department took form between 1906 and 1913 with appointments in European, Medieval, English, Ancient and Latin American history, so that on the eve of the First World War it offered an extensive range of courses. In the following decade, Illinois was in the forefront of developing what then was considered an essential integrative vision in the teaching of history - the history of Western civilization.  From then until now our understanding of what historical scholarship is all about has undergone a sea of change. Undergraduates still study the history of Western civilization. But now they also increasingly choose courses surveying areas outside Europe and the United States as well as global history.

Today there are over 50 faculty members researching and writing, teaching and advising undergraduate and graduate students on a range of historical topics markedly different from those that occupied the founding generation of historians at Illinois. The faculty at Uof I- including a large number of new faculty hired in the last several  years - can be characterized both by cutting-edge scholarship in particular fields of specialization and a willingness to engage in debate of broad, comparative issues with the intellectual community of the department and the University.

Much has changed from the beginning of the Department of History at the University of Illinois until now. What has not changed is our dedication to excellence in history.

The undergraduate history major is one of the most vibrant programs of study in the College of Liberal Arts and Sciences. Its mission is to foster a deeper understanding of the historical processes that shape our world, to engage students in hands-on historical research, and to prepare them for a variety of careers in which critical thinking, informed analysis, and incisive writing are crucial skills.

Our graduate program at the University of Illinois aims to prepare knowledgeable and conscientious scholars engaged both in the academy and the broader society. Students master particular specializations within history while confronting the questions that are defining contemporary research in the humanities as a whole.

It takes a broad range of experiences to become a professional historian, and the University of Illinois offers them all. Demanding graduate courses are followed by sustained mentoring relationships with faculty members. Departmental reading groups  and workshops meet regularly to begin or continue conversations. Teaching assistantships provide practical classroom experience; while most historians find that the informal ties to their cohort of graduate students (both within and without the University) shape their careers as historians and last a lifetime.

Research seminars and problems courses familiarize students with the historian's craft and current debates. An increasing number of courses are thematically organized, crossing boundaries of geographically and chronologically defined fields.

A close mentoring relationship between graduate student and advisor, based on mutual respect and trust, is vital for a successful passage from incoming graduate student to accomplished professional historian. Although ours is a rather large department in terms of faculty, we have purposely chosen to keep the graduate program smaller than those at some of our peer institutions. This means that each student can normally expect to receive considerable personal attention from his or her advisor and other faculty members.

Reaching Across Cultures and Disciplines

The Department of History is firmly rooted in the traditions and canons of the discipline of history, but it also encourages interdisciplinary approaches. Faculty and students in our department converse with other scholars across a wide range of disciplines from political science, sociology and economics to anthropology, literary criticism and film studies.

The University of Illinois belongs to a small group of some fifteen leading research universities in the country that dedicate significant resources to international studies. It maintains four language and area studies centers: the Center for African Studies, the Center for East Asian and Pacific Studies, the Center for Latin American and Caribbean Studies, and the Russian and East European Center. Historians play a prominent role in the direction and activities of the area studies programs, and the centers regularly support the work of history graduate students. In addition there are Programs in the Center for South Asian and Middle Eastern Studies and European Studies.These programs provide speaker series and language study, sponsor symposia and special library acquisitions, and offer financial aid for graduate training.

The University also sponsors numerous programs that offer interdisciplinary lecture series, workshops, conferences and research projects. The Program in Science & Technology Studies (STS); the Program on Arms Control, Disarmament, and International Security (ACDIS); the Program in Jewish Culture & Society; the Asian American Studies Program; African American Studies; Latina/o Studies; American Indian Studies Program ; Gender & Women's Studies; Illinois Program for Research in the Humanities (IPRH); the Center on Democracy in a Multiracial Society, and the Unit for Criticism and Interpretive Theory  provide opportunities for graduate students in history to work alongside faculty and peers in other disciplines, thus expanding and enriching the training received in the department. 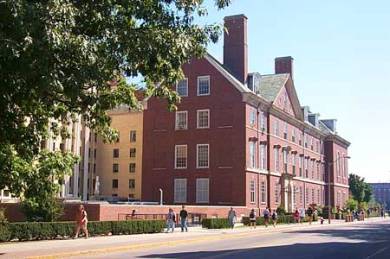 A central part of becoming a historian consists in publishing articles in peer-reviewed professional journals and presenting research at regional, national and international conferences. The Department of History encourages graduate students to get involved in these aspects of the profession as early as possible during their graduate careers.

For a graduate student in history, the University Library is the single most important resource on campus. With almost nine million volumes, the University of Illinois Library is the third largest academic library in the United States, after those at Harvard and Yale. The especially rich journal collections are noted by virtually all faculty members as a main asset of the library, from science serials to geographical societies, technical and mining journals to the rare pre-war Japanese journal on urban studies, Toshi Koron. There are 38 departmental libraries, including a History and Philosophy Library. Comprehensive bibliographic and reference services allow many kinds of historical research projects that would be impossible in smaller libraries.

Among the regional and chronological collections that have few parallels are the Eastern European collection, records of antebellum southern plantations from the American Revolution through the Civil War, a Latin American collection of over 300,000 volumes, one of the finest classical libraries in the United States, a collection of published documents in medieval history that is among the most complete in this country, and virtually all of the print and microfilm material from the papers of the leaders of the early national period in the United States. Specific strengths for research are to be found in the Lincoln Room, the University Archives, the Illinois Historical Survey Library, and the Rare Book Room.

The History department proudly supports over nine dozen graduate students engaged in critical historical inquiries. During the course of their study, many of these students serve as Teaching Assistants that faciliate undergraduate education.

Graduate students in History at the University of Illinois at Urbana-Champaign participate in the academic and cultural life of one of the nation's great universities. National surveys currently rank Illinois among the top dozen institutions in the country and among the top five public universities. Beyond the award-winning faculty, there are a wealth of programs designed to enrich the academic and human experience.

The National Center for Supercomputing Applications (NCSA) reflects the position of the University as a recognized world leader in the fields of computer science and electrical engineering. The University is one of the nodal points in the emerging information highway network, and research here created the leading Internet access technology.

The Arnold O. and Mabel M. Beckman Institute for Advanced Science and Technology brings together scientists, psychologists, sociologists, linguists and humanities scholars for interdisciplinary research on human and artificial intelligence. A corona of programs and institutes in the social sciences and humanities provide venues for interdisciplinary research and colloquia, of increasing importance in our own discipline.

The campus is also a major center for the arts. The Krannert Center for the Performing Arts (KCPA) has been called "arguably the best performing arts facility in the nation." With four indoor theatres and an outdoor amphitheatre, Krannert Center brings many of the world's greatest performers to campus and provides students in music, theatre, and dance with an outstanding professional training program. Popular entertainment, exhibitions, and athletic events take place in the dome-shaped Assembly Hall. There are five art galleries and three museums on campus, among them the Krannert Art Museum, second only to the Art Institute of Chicago among Illinois public art museums in the size and value of its collections. Students and faculty also have access to remarkable sports and exercise facilities at the Intramural Physical Education complex.